The challenge of change

Throughout history people have thought that theirs was a truly transformative time. In hindsight they were often wrong but, says Bert van der Zwaan, now there are reasons to believe that the world of higher education at least is changing more profoundly than ever.

As an institution the university is being forced to adapt to the changing demands of society and to new technologies that are rapidly emerging. For over 800 years the university has remained basically unchanged (although, of course, the reason for its successful survival is that it has been able to meet changing demands) and as a consequence developed from a small institution, serving church and/or a feudal lord, to the independent bulwark of teaching and research of the Humboldtian university model.

What has changed, however, since the Enlightenment is that the elitist university of Von Humboldt’s day transformed into the modern university in which mass education is the norm. In most Western countries we now see a participation in higher education of over 30% whereas 50 years ago it was less than 5%. That significantly affects the nature of the university and leads to many challenges that are more and more difficult to meet since the budgets for higher education are not keeping pace with the growth in student numbers. In some countries the budgets are even shrinking due to the pressing demands on governments imposed by the costs of an ageing population or the growing budgets needed for sustainable development.

A number of recent developments potentially form a considerable threat to the conventional Western university. The first is the rapidly changing economic balance in the world, in which Asia and in particular China are taking a leading role much more rapidly than predicted. We can expect that in the wake of the shift of economic power the point of gravity in science will likewise shift.

It is rather easy to predict now that Chinese universities will become much more visible and influential at the expense of, in particular, North American dominance. As a consequence, the “war for talent” will inevitably lead, and in fact is already leading, to a flow of talent towards Asia at the expense of the US and Europe.

In addition, student streams to Australia, the US and the UK will diminish, certainly from China, which might have serious consequences for universities in these Western countries, whose business models are heavily dependent on foreign students.

The second trend is the increasingly visible impact of digitisation on education, which forms the basis for what is called the “unbundling of the curriculum”. Digitisation stimulates the offering of teaching in the form of modules. But while modularisation is a prerequisite for digitisation, digitisation in its turn helps to make customised teaching possible.

But what is less visible is that digitisation also facilitates the rise of private providers of tertiary education. Using internet-based distant learning they offer profitable chunks of education to a potentially large market. The price of this education, therefore, is competitive, and the providers operate in the profitable parts of the market where digital mass education is easily realised, i.e. a low degree of supervision and no expensive research. All these developments stimulate “lifelong learning” and a tendency to pay-per-course and thereby gather microcredentials, which possibly (but not necessarily) eventually lead to a degree.

The third important trend is related to the fact that the knowledge agenda of governments and universities is increasingly and rapidly shifting to give the “grand societal challenges” a higher priority. This is due to the fact that society is demanding that universities contribute to solving the huge challenges society is facing such as global climate change, migration and the availability of food and water.

While most university leaders are very busy attempting to keep abreast of all these changes, it can easily escape their attention that around them society is changing significantly. Looking back, the financial and monetary crisis of 2008-2011 was an important turning point in recent history because at that time the cracks in the neoliberal and capitalist veneer came to the surface.

All of a sudden, large groups in Western societies realised that the policy of open trading and internalisation, while bringing home many positives also brought a number of negatives. In reaction, populist and protectionist policies became increasingly prominent, leading, for example, to the election of President Trump in the US. Everywhere, dissatisfied segments of the population voted against traditional and established parties.

From 2014 onwards it became clear that this undercurrent generated by dissatisfied people had already been long present and signified a still-growing social divide mainly caused by higher education. Research shows convincingly that over time higher education has produced a wealthier and globally oriented segment of the population, which potentially has many opportunities within the labour market.

In contrast, those without higher education earn less and are more often the victim of economic decline. They are feeling increasingly dissatisfied and threatened by the outside world. Dutch research shows that these groups are also operating increasingly within their own bubbles and that communication between the bubbles of the higher- and lower-educated parts of the population is difficult, each group becoming more and more encapsulated. The result is that once in a bubble the chances are that you are destined to live there, marking an end to the American, or any other, dream of equal opportunities.

This social divide threatens the university since most of the people without higher education favour cutting the budgets of research and education and are opposed to internationalisation and globalisation, mostly out of fear of losing their position. For the same reasons they vote against immigration even of talented young people. In all dimensions, this has impact on the very foundation of the university and requires a fundamental revaluation of higher education.

The first and obvious paradigm to rethink, of course, is the dogma that higher-educated workers should automatically have higher salaries whereas blue-collar production workers should earn less. This is the very root of the dissatisfaction. But fixing it requires long-term changes to the labour market.

In the short term, the university needs to regain the trust of society by showing that it is to the good of everyone in society and not a burden for which lower-educated people have to pay while receiving nothing in return. This requires that the university changes from an ivory tower to a really engaged organisation that solves the problems society is struggling with instead of constantly asking for more money to do so.

In the midst of all these changes, there is a third level of change that might easily threaten the university even more than the developments summarised above. This concerns the rapid and possibly even disruptive development of digitisation and artificial intelligence (AI). Over the last two years we have seen staggering examples of the potential of AI from which it is clear that the impact of robotisation could be disruptive.

Research will have a substantially higher pace due to the ability to read and digest data automatically and big data systems will turn into valuable sources from which robots — at unprecedented speed – can extract solutions and answers to new research questions. But also, knowledge transfer and teaching will change dramatically since large parts of routine teaching can be taken over by robots.

However, instead of regarding this as another threat, this could also be an opportunity because it might give the overburdened staff of the modern university more time to focus on what is really important to the future: creating leadership and critical citizenship, which builds on the ability to think independently and creatively. The latter competencies require the use of very experienced and very good teachers and constitutes a domain in which the robot is not able to perform satisfactorily.

In these times of unprecedented change, the university can only survive if its leadership is able to point the way to the future. It is clear that we are entering uncharted waters and good leaders should be blunt in pointing this out. But, as always, it is good to realise that over time people have considered barriers to be insurmountable but in the end concluding that they have succeeded in overcoming them. But this is only do-able if leadership respects a careful balance between top-down and bottom-up change.

At the same time, universities need to realise that it is impossible to define the course to the future in detail; there are simply too many unknowns. That pleads for a university that is constantly tinkering, adapting to the changing conditions but at the same time keeping a keen eye on the larger issues at stake: that the university is unbundling and that digital and flexible learning will become the norm. Also, that the university could profit tremendously from AI, if it is used to free-up capacity for face-to-face contact between teachers and students.

But the use of knowledge in a creative way will be key in and to the future. Skills in leadership should be as much a part of university education as disciplinary knowledge. And perhaps, most of all, the university should remain open to the demands of society so that society is prepared to support and finance tertiary education. 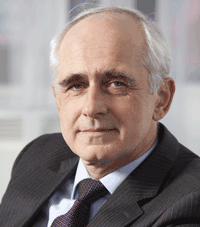 . @hypernorth the Executive Director of @TheGRLI , observes how our current #global reality calls for courageous academic #leadership for dealing with immediate priorities as well as future change. Read more 👇 https://bit.ly/3e3A5mr

🌎 “Running a ‘sustainable’ business is not about recycling and tree-planting programmes; it’s about putting #sustainability at the core of your shareholder value proposition,” says @rudiplettinx. @FutureWF #EFMDGlobalFocus #leadership https://bit.ly/2UhtkWh